The 90/10 fundraising rule of thumb has been broken (more like shattered) by my good friend Peter Wylie who provides some incredible data and insights on the CoolData blog. I was fortunate enough to receive an early look at the data, so I have had some time to ponder the implications. There is a wealth of data to explore, but here is the chart that really caught my eye: 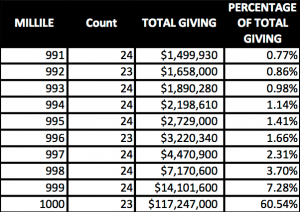 This means that 1/10th of 1% of alumni donors to this school account for 60% of all giving (the top 1% represented nearly 96%). And Peter only looked at alums who gave. If he had factored in non-donor alums then the number would be even more dramatic if that is even possible.

Before I continue I want to tip my hat to the amazing donors who are willing to underwrite such a large percentage of an institution’s needs. I also want to say “well done!” to the fundraisers who worked with these philanthropists, and hopefully are still working with them.

Having seen more donor databases than most folks on the planet I was not completely surprised by the numbers, but I was startled to see it broken-down into tenths. It was a reminder of how vulnerable schools are who rely on a few good people to underwrite most of their needs. For years I, and many others, have preached a giving pyramid that looks like this makes no sense: 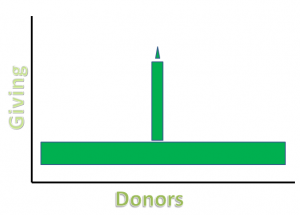 That tiny 1/10th of 1% sits on the top of a thin slice of fellow donors. If those generous donors decide to stop giving, and more than one school experienced that in the last few years, then fundraising is in serious trouble.

If a company had sales which looked like this there would be panic in the board room. Many a business has gone bankrupt because it relied on a few customers to pay a lot of money for their products. Lacking a robust client base, competitors come along and undercut them on pricing, take those customers away, and they become another failed venture.

All of this comes back to the topic I am spending a lot of time on -Â donor retentionÂ (or the lack thereof). If acquiring new donors is getting harder, and keeping them even tougher, then it would seem the only alternative is to focus your resources on the people at the top.

But what would happen if you took some of those resources and confronted your donor retention problem? Imagine for a moment the middle of the pyramid expanding: 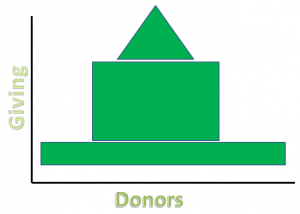 Two things happen: First, you enjoy higher overall giving; second, the top of your pyramid grows because there are now more people who are fully engaged because of a stronger retention program.

We are both blessed and cursed in philanthropy to be able to ask one person for a $1 and another for $1,000,000 for the same product. It is truly a blessing people will do this, but it has cursed us with a culture of giving rather than the culture of philanthropy needed to create a thriving community of engaged donors.

Thank you Peter for your great work, and for introducing us to the importance of seeing the world in tenths. Be sure to check out Peter’s books: Data Mining for FundraisersÂ and Baseball, Fundraising, and the 80/20 Rule: Studies in Data Mining.