When talking about a fundraising campaign the first question usually is, â€œWhatâ€™s the goal?â€ The higher the number the more impressed we are. I have enough grey hairs to remember when a billion was a big deal. Now a billion seems quaint as USC continues its quest for $6 billion. In the hyper-competitive world of higher education fundraising can the $10 billion campaign be far off?

In the middle of all of this â€œmy goal is bigger than your goalâ€ activity I came across a campaign with no goal at all: The Great Give at Florida State University. A 36 hour on-line campaign, donors could select from 24 programs. There was no overall goal – only a cost next to each program.
Despite the campaign having the misfortune to be launched at exactly the moment the world was focused on the police closing in on the Boston Marathon bombing suspects (April 18-19), it raised nearly $114,000. $57,000 a day is not too shabby for an on-line campaign.

The money is great, but what I like most about this approach is how it centers on mission goals rather than fundraising goals. Donors are exposed to projects often lost amid the hype about reaching the big number. It also presents the costs of the projects, something missed when the conversation is about how much needs to be raised. 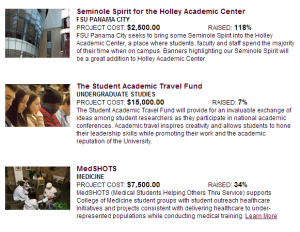 This approach has another big benefit â€“ it allows donors to explore your mission and discover where their interests and passions intersect with your needs. This has huge potential for increasing donor retention as people no longer feel trapped into always giving to what they have supported in the past (of course for this to truly translate into long-term giving organizations have to respect the choices donors make).

On the acquisition front, mission-centered goals provide prospective donors the freedom to find their own paths to your organization. This also combats the dreaded restricted gifts for programs you donâ€™t need because you have given people choices, but not the choice to create their own projects. I believe a lot of the nightmare gifts are received because of organizations insisting donors have to give for particular program areas.

As you plan your next fundraising campaign think about adding choice to the mix, and making the goal about the cost-of-mission instead of the cost-of-fundraising.

P.S. Kudos also to FSU for having their Leaderboard focusing on how the projects are doing instead of how much individual donors have given.