â€œ360 Degree Viewâ€ long ago made its way onto the BS Bingo board at conferences. Vendors and consultants promised a complete picture of your relationships regardless of whether your interactions were on-line or off-line. Millions of dollars, and countless hours, have been spent making the 360 view a reality.

For fundraisers this meant bringing together all of the elements of a successful campaign. For other departmental silos it delivered the view they needed to get their job done. Leaders began to receive more complete data from their direct reports, and for a while it seemed as if 360 had helped organizations do a 180 in terms of having the data needed to make better decisions.

But there was a problem â€“ in fact many problems.

First, the 360 view was essentially a new way to look at all the structured data found in a traditional database of record (known as a donor management system for fundraisers). 80% of data today is unstructured and it has little to no place in the 360 paradigm.

Second, it was a 360 view of each silo â€“ not of the organization.

For leadership this meant they were not receiving all of the information from each silo, and they were not provided the cross-organizational view they really needed. 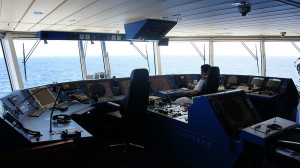 It is like a shipâ€™s captain receiving reports from each deck at different times â€“ some more complete than others. The captain makes the decision to continue the journey not realizing the refrigerator is broken and the food will spoil soon because that department is late with their report or perhaps doesnâ€™t want the captain to know there is a problem.

For the President of a college this might be the cancellation of season tickets by an alum he is counting on to support the capital campaign.Â The head of a homeless shelter could be asked to be part of a tour of the shelter for a large donor who she discovers volunteers there once a week.Â A headmaster of a private school calls on a prospective donor not knowing their daughter just received a very negative report from one of her teachers.

And what about the mission? Are leaders able to see not only transactional elements of impact reports, but also analysis of written responses? Can they see how employee engagement is affecting performance of students?

Leaders understand what they donâ€™t know can, and does, hurt them. For them viewing only what their silo managers can see is not enough. They need a cross-organizational view to confidently, and safely, set a course for sustainability.

P.S. If you are interested in learning more about how you can bring cross-organizational intelligence to your leadership click HEREÂ or stop by the New Science of Philanthropy booth at the APRA International Conference August 7-10 in Baltimore.